It is a medical device that gives you extra oxygen, it is an effective supply source in home oxygen therapy. 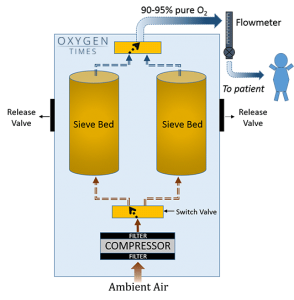 The natural air consist of oxygen and nitrogen it uses PSA (pressure swing adsorption) where nitrogen is absorbed leaving oxygen to pass through.

The air first passes through the four filters which removes bacteria and dust.

The air is then forced by a compressor into canister

The canisters contain molecular sieve beds filled with zeolite (aluminium silicate) which binds the nitrogen and separates it from oxygen thus increasing the oxygen concentration to as 90%.

The period of oxygen outflow from one coinciding with the discharge of nitrogen from the other, so that a continuous supply of oxygen enriched gas is delivered to the storage vessel.

Oxygen is the size of a small refrigerator in which the air is forced under pressure through molecular sieve beds filled with zeolite which binds the nitrogen and separates it from the air as in gas chromatography thus increasing the proportion of oxygen from about 20% to about 90%. 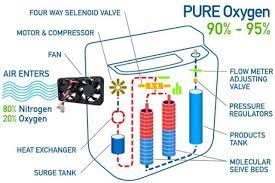 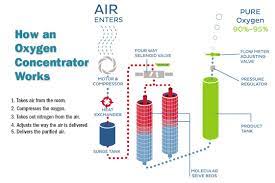 May 7, 2022 by margaret
Uncategorized